We'll be playing at the SLO Jazz Festival in Mission Plaza on May 20th.  I'm thrilled to be making my debut at this festival, a relatively recent addition to the central coast festival lineup.  As always there will lots of great local music as well as some phenomenal headliners from out of town.  This is just one day a year, so block off your schedule and make a point to spend the date down at the Mission.  All the details at: http://www.slojazzfest.org/

Look who's coming to town! 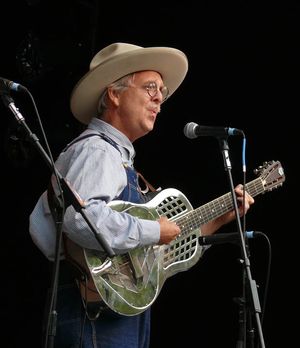 On Friday April 10th, I'll be making my debut at one of San Luis Obispo's nicest venues, the Steynberg Gallery.  Ok, not quite a debut, I played 1 song there back in the fall as part of one Steve Key's great shows, but this is the first time I'll be bringing my own band.  And what a band it will be.  The wonderful Karl Welz on saxophone. The Sweetheart of California herself, Miss Katie Cavera on bass.  And my very special guest, LA based guitarist/banjoist/whistler/entertainer John Reynolds.

This will be John's ***San Luis Obispo*** debut but he's not entirely a stranger to the Central Coast.  You might have heard him on my most recent CD, Let's Get Lost.   I've had the pleasure of working with him off and on for the last 10 or so years.   He's often part of my group when I perform at Hearst Castle, his mix of 1920's & 1930's songs are perfect for the setting.   His bands The Reynolds Brothers/The Ellis Island Boys are mainstays on the traditional jazz festival circuit and frequent performers at the annual Pismo Beach Jazz Jubilee and Monterey Jazz Bash By the Bay.

Or you may have caught him back at the Live Oak Music Festival back in 2008, where his infectious performance woke everyone up Saturday morning and festival goers found themselves hurrying from their campsites to the main stage.

These days John can be spotted performing most weekends at California Adventure, so it's a rare treat to get him up our way.  Don't miss your opportunity to catch him, the last time I was able to bring him to town for a public show was back in 2010, and I don't know when it will happen again.  So get your tickets and spread the word!

The show starts at 7:30pm.  Tickets are $15.  The Steynberg Gallery is a wonderful intimate venue, so I recommend calling and getting your reservations early.  Food and beverages of both the coffee shop and adult variety will be available for purchase.

It happened in Monterey

I was thrilled to get to be a guest artist at Monterey's Jazz Bash By The Bay this year, and particularly delighted to sit in with one of my favorite groups, Le Jazz Hot! Even though I was just getting over a cold, I had a blast! Lucky me jazz writer and videographer Michael Steinmann was there to capture our set.  Be sure to check out his related blog post, as well as the rest of his site, it's a treasure trove of videos of contempory players, ebay/thrifting finds and of course, lots of wonderful writing about the music and our hereos.

Some great shows coming up in the next few weeks, starting next Sunday January 26th at the Basin Street Regulars Sunday session.  It'll be a swinging afternoon with a crack team band led by Clint Baker and featuring Carl Sonny Leyland, Marc Caparone, Katie Cavera and Mike Baird.

All the info and more shows here.

It's always fun when I have an opportunity to add a "forgotten" song to my repertoire, and dust off a beautiful tune that doesn't seem to be performed very much any more.  Over the weekend I performed at a party with a theme of 1943 and in putting together my set list I noticed "Sunday, Monday, or Always" (words by Johnny Burke, music by Jimmy Van Heusen) on the list of hits from that year.  I knew the title, but couldn't really remember how the song went, and I'm glad I decided to check it out. It's a fairly simple song, but has all the qualities that suck me in - nice structure and lyrics, a soaring melody, and well, room to croon, so to speak.   Bing had the big hit with it, but I love this version from Mildred Bailey, especially how she lingers evocatively coming out of the bridge on "pound and pound".  And what a treat it must have been to say "Give me four, Teddy"!

With the Royal Garden Swing Orchestra

One of my favorite songs to sing is  "I've Got Beginner's Luck", and I'm hoping for some this weekend! I'm making my debut with the Royal Garden Swing Orchestra - fulfilling a life long dream of singing with a big band!  Three shows, one tonight at D'Anbino and then two tomorrow afternoon at the 37th (if my math is right) Pismo Jazz Jubilee.

See my calendar for all the details....

We had so much fun with Charlie last year, we're excited to be bringing him back for another show!

For over 30 years Grammy nominated guitarist “Little” Charlie Baty led the well known and much loved Sacramento based blues group 'Little Charlie and the Nightcats', performing at jazz and blues festivals through out the country and Europe. He combines a strong Charlie Christian influence with a jump blues background, adding in shades of traditional jazz, gypsy jazz, Brazilian music and even polka to bring an energetic, whimsical approach to the guitar.  He has shared the stage with great blues artists such as Big Mama Thornton, Albert Collins, Floyd Dixon, John Lee Hooker, and these days frequently tours with Mark Hummel’s Golden State/Lone Star Revue, and performs with his own groups Organ Grinder Swing, and the Little Charlie Caravan.

Charlie will be onhand Sunday for the 65th annual concert series presented by the North County Community Concerts Assocation.  65th annual!  That's pretty cool and I'm honored we're the first group for the 2013-2014.  The band will also feature the hot cornet of Marc Caparone, Teddy Wilson-esqe piano stylings of Chris Dawson and local bass powerhouse Dylan Johnson.  Purchase tix at the door, for more info visit www.nslocca.org or call 805-239-2770 or 805-434-5538.

Judy and Dawn take you on a Sentimental Journey! 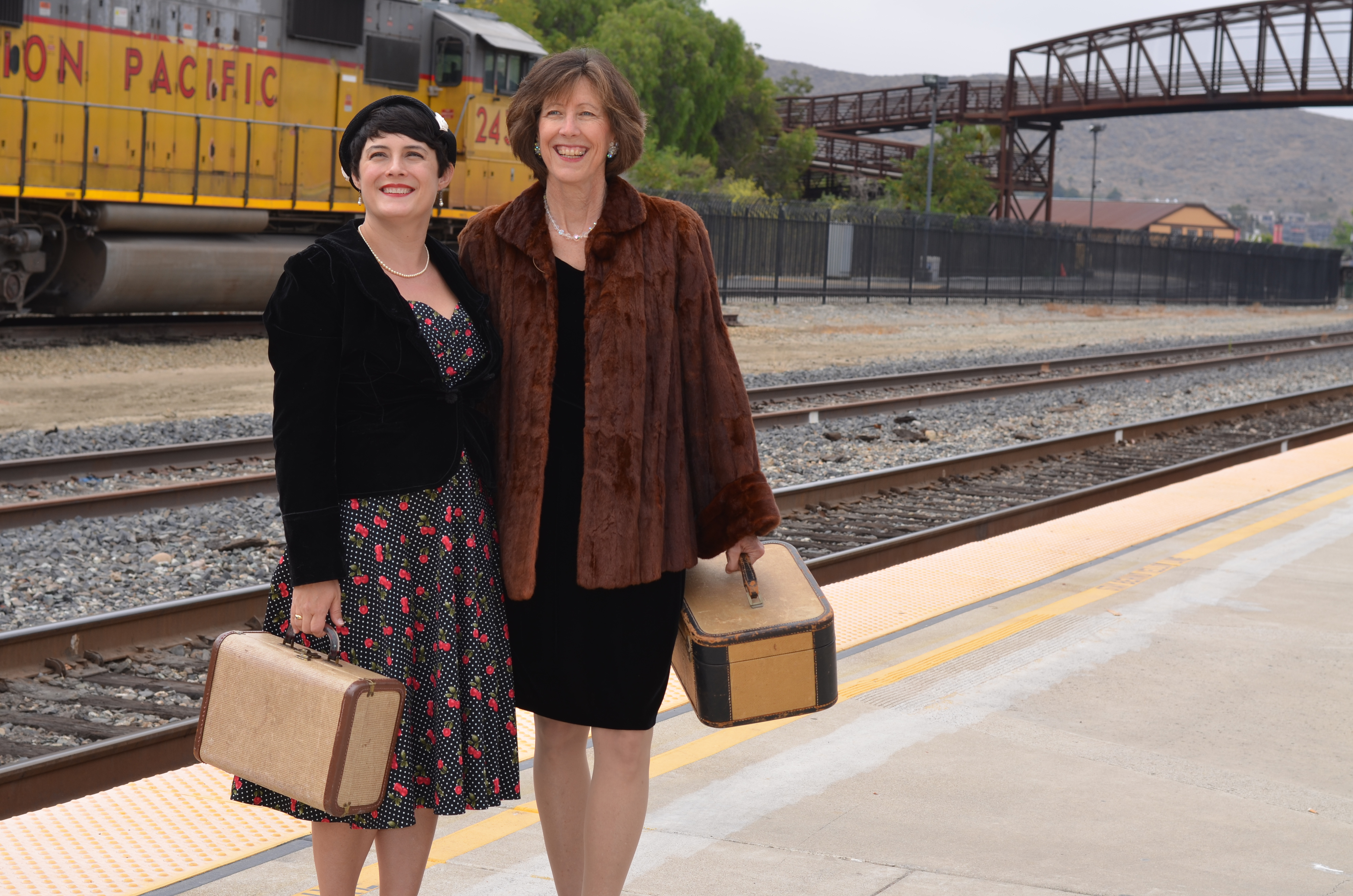 Join Judy Philbin and I to take a 'Sentimental Journey'!  Backed by an all star group featuring Bob Harway (piano), Adam Levine (guitar), Karl Welz (saxophone), Ken Hustad (bass), and Darrell Voss (drums), we'll be taking a walk down Nostalgia Lane, performing favorites from Route 66 to California Dreamin'.  My first time performing at the beautiful Templeton Performing Arts Center and I can't wait!   Tickets can be purchased from me or Judy in person, online, or in Templeton at Upscale Resale, Matt's Music or the Chamber of Commerce. Please help us make our debut at the PAC a success by getting your tickets early.  Saturday September 28th, 7pm at the Templeton Performing Arts Center.

"Lambeth is a joy to hear, and the musicians enhance her artistry"

"As I listened to this disc, I thought about what singers Lambeth recalled, and three came immediately to mind, Maxine Sullivan, Rosemary Clooney and Rebecca Kilgore, not because of the sound of her voice, but because of her laid back but confident reading of the lyrics to each song, done with respect for the words, and a full understanding of the way that they should be sung to convey the lyricists’ intent."

Wow - I love it! - A big thanks to Joe Lang, for his nice reviews of Let's Get Lost and my live DVD.!

An Evening At The Castle

Last weekend the guys and I donned our best 1930's finery and headed up to Hearst Castle for a poolside serenading as part of the premiere of "Citizen Hearst" at the SLO International Film Festival. It's hard to go up there and not day dream a bit about history of the place, I would love to have been a fly on the wall for some of those dinner parties, or better yet, the after dinner entertainment! 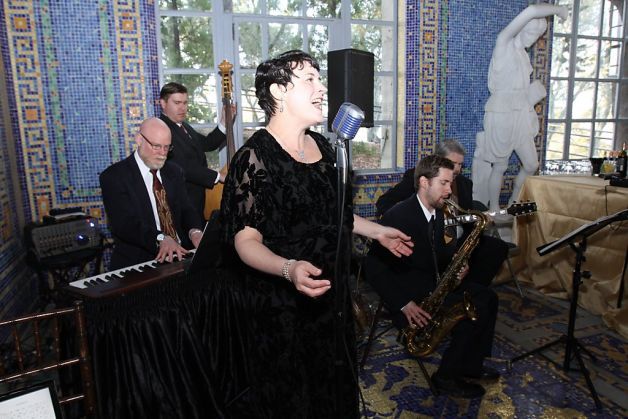 More about the movie and the event here.